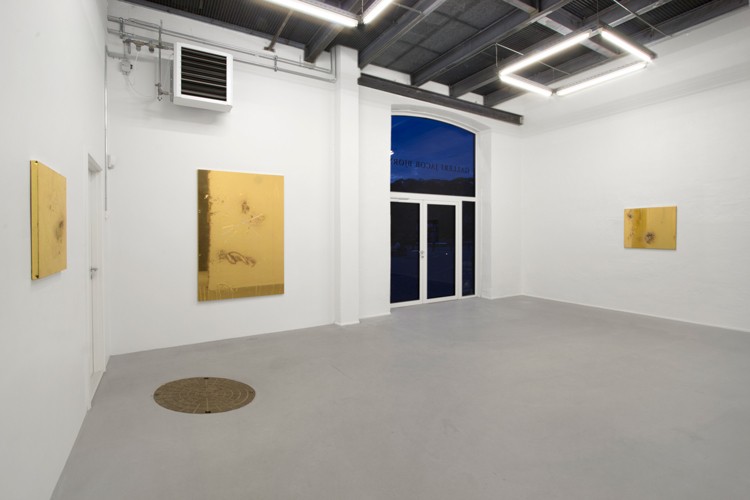 Galleri Jacob Bjørn is pleased to present Panem et Circenses, a solo exhibition by Danish artist Mikkel Carl. The exhibition title is Latin for “Bread and Games”, a figure of speech referring to superficial means of appeasement. Within a political context, the metonymic phrase means to generate public approval not by excellence in office, but by satisfying only the most base requirements of a populace: food and entertainment.

The exhibition extends Mikkel Carl’s pre-occupation with the repurposing of industrial space into that of art. Through tight spatial propositions, the artist suggests that the implications of such a process of spatial appropriation are at once formal, semiotic, and economic—not dissimilar from the fundamental logic of the ready-made. This dialectical looping back between object and meta-object, between macro and micro scales of signification, characterizes much of Carl’s work; a method he has referred to as “associative grammar.” Here, exhibition contexts are considered and approached as linguistic structures in their own right, their signification ripe for deconstruction and critical intervention. These may range from poignant socioeconomic critiques to hoax epistemological propositions, often presented simultaneously and side-by-side, causing bewilderment in the viewer. By riffing histories of minimalism, conceptual art, institutional critique, and relational aesthetics in both sincere and highly satirical ways, Carl questions the very legitimacy of contemporary art’s modus operandi.

Mikkel Carl’s monolithic work A Vague Nothing at the Intersection of Subject and Object (2017) consists of 6 individual faux steel plates each measuring 5 x 122 x 305 cm. They may be combined in any number of ways depending on the exhibition context; e.g. as an upright wall bifurcating the gallery in two, or as narrow passage. For Panem et Circenses, the work has been adapted to Galleri Jacob Bjørn's high-ceilinged gallery space located in the defunct Ceres brewery, where it will partially block a high sitting suite of windows. This intervention produces a spatial self-awareness in the viewer, in the spirit of classical minimalist sculpture. Another returning, and perhaps more congenial, source of inspiration is Michael Asher’s 1974 removal of the partition wall that separated the office space from the exhibition space at Claire S. Copley Gallery in Los Angeles. Recently, Carl engaged this work by covering existing exhibition architecture at ARoS Aarhus Art Museum with wall elements from previous exhibition designs, while also leaving behind the install crew’s paint-splattered Bauhausian folding chairs (What Cannot Be Imagined Cannot Be Seen, 2015/2017). Carl’s current exhibition Terrified of Society and Its Unclean Bite (2018) at M23 Projects in New York, similarly features the eponymous towering faux reinforced concrete wall, effectively rendering one half of the gallery space completely inaccessible to the viewer.

Panem et Circenses also contains a series of “paintings” made from purposefully damaged gold metal foil applied to aluminum stretchers, mirroring their surroundings in a stimulating, busted fashion — including the visitors and the steel plates. This produces ever-digressing spatial reflections between them. The series Untitled (Glamour Is for Those Who Can Afford not To Be Glamorous), references a public work Mikkel Carl did at Sydhavn Station installing self-adhesive mirror foil on poster stands, instigating a moment of reflection in bypassing commuters in the place of conventional advertising. Initially this work was fabricated in chrome metal foil, and so it was not until a long-time collector of Carl’s work commissioned a “painting in gold,” that he took up this loaded material. Emphatically re-entering a commercial context, Carl inverts the original reflectivity of the public work and seems to render it a hollowed, commoditized experience, radically questioning the supposed sincerity of the artistic gesture, his own included. Ultimately, no answer or fixed position is provided by the artist: only a persistent un-doing and re-doing of the syntax of art.

by Jeppe Ugelvig, curator educated at CCS Bard, and freelance critic on art and fashion. 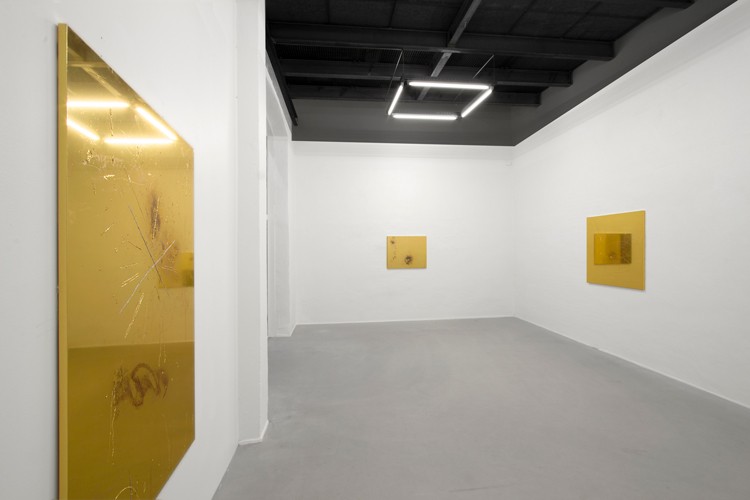 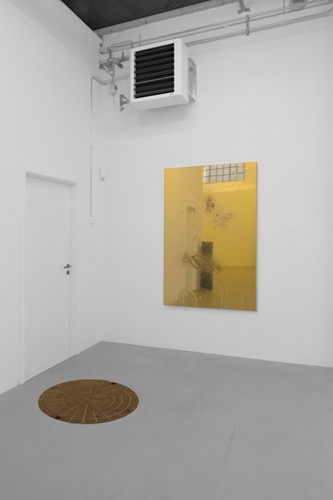 UNTITLED (GLAMOUR IS FOR THOSE WHO CAN AFFORD NOT TO BE GLAMOROUS), 2018
Mirror foil mounted on canvas, hot glue, gold leaf, silver leaf, cobber spray, acid, aluminum stretchers
170 x 110cm 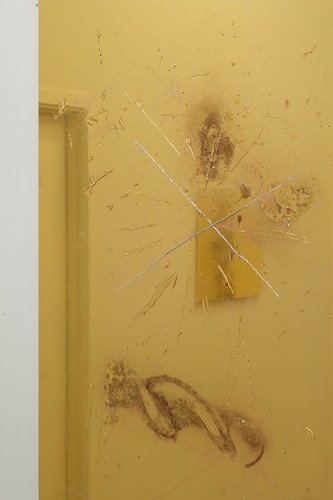 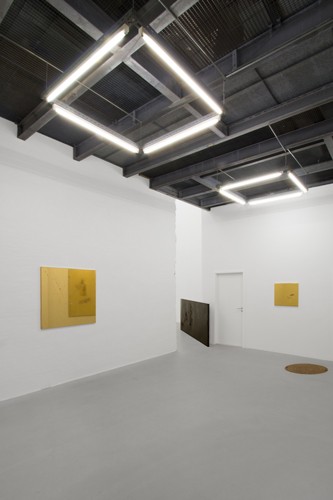 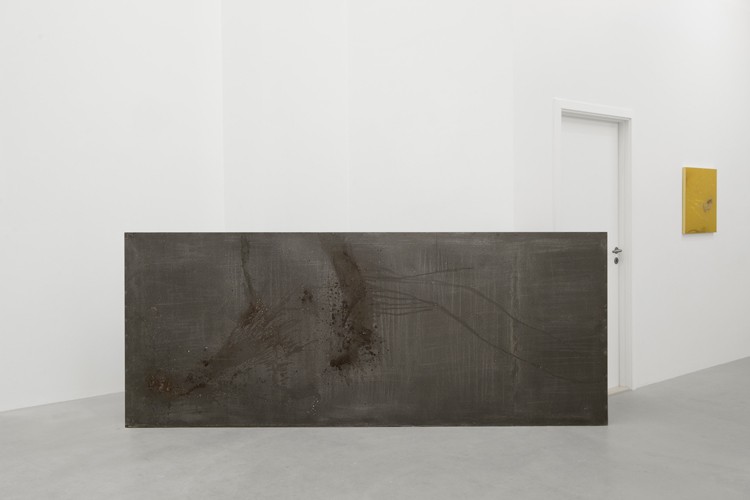 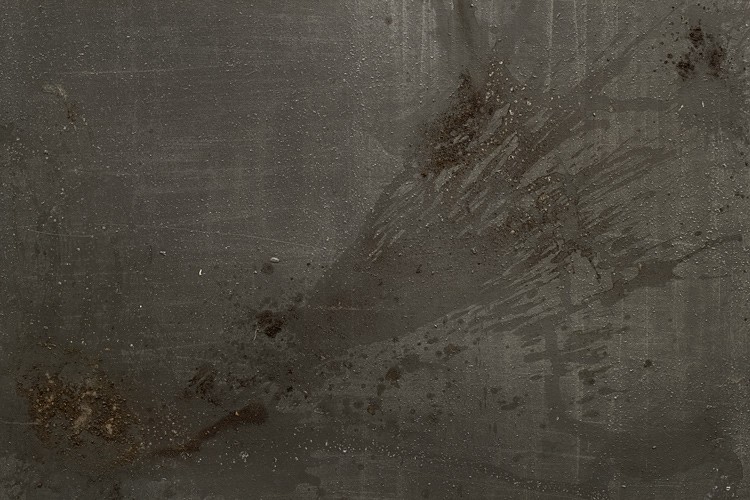 A VAGUE NOTHING AT THE INTERSECTION OF SUBJECT AND OBJECT, 2017 (detail)
Graphite, lacquer, rust, hot glue on double-sided wooden panel
122 x 305cm 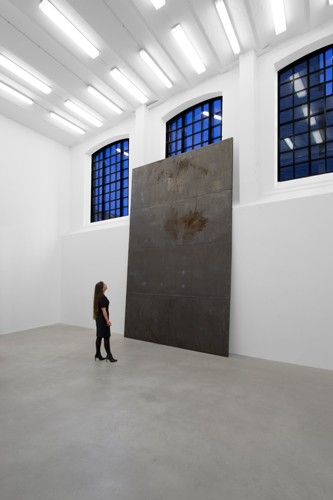 A VAGUE NOTHING AT THE INTERSECTION OF SUBJECT AND OBJECT, 2017
Graphite, lacquer, rust, hot glue on double-sided wooden panels
305 x 488cm 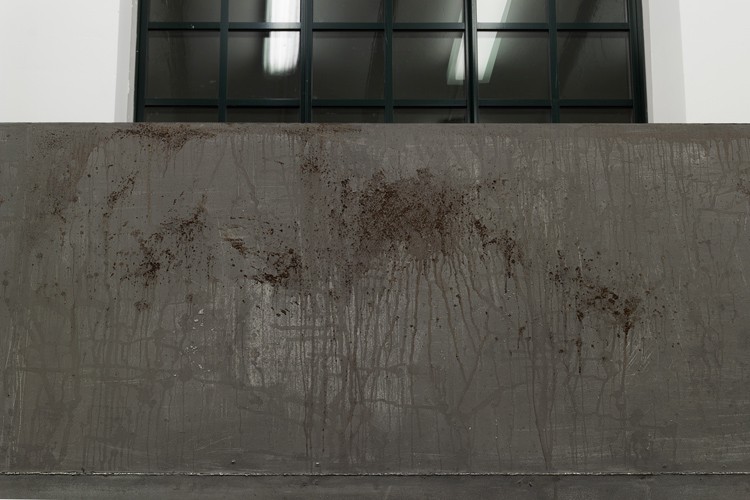 A VAGUE NOTHING AT THE INTERSECTION OF SUBJECT AND OBJECT, 2017 (detail)
Graphite, lacquer, rust, hot glue on double-sided wooden panels
305 x 488cm 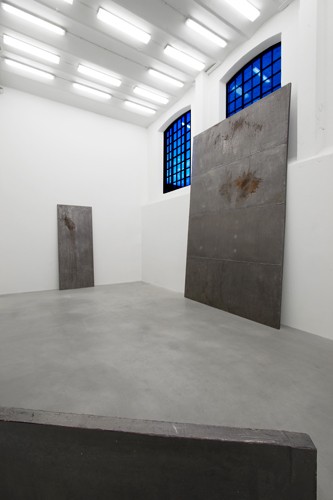 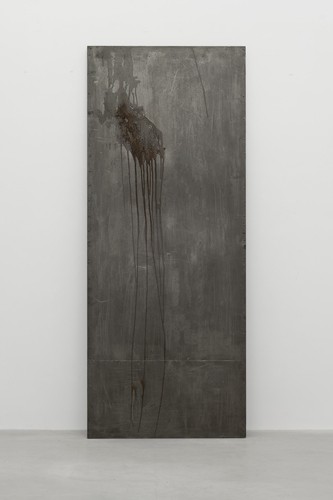 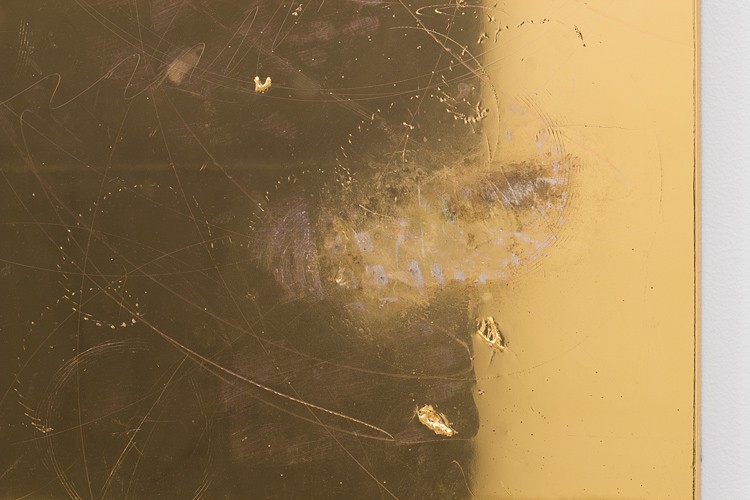 UNTITLED (GLAMOUR IS FOR THOSE WHO CAN AFFORD NOT TO BE GLAMOROUS), 2018 (detail)
Mirror foil mounted on canvas, hot glue, gold leaf, cobber spray, acid, aluminum stretchers
55 x 55cm 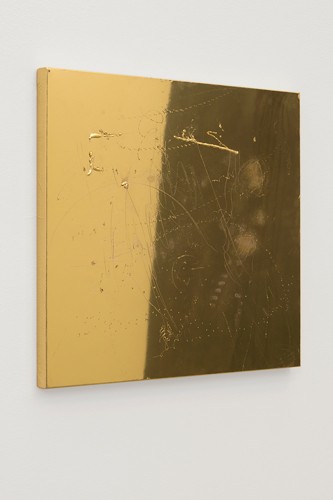 UNTITLED (GLAMOUR IS FOR THOSE WHO CAN AFFORD NOT TO BE GLAMOROUS), 2018
Mirror foil mounted on canvas, hot glue, gold leaf, cobber spray, acid, aluminum stretchers
55 x 55cm 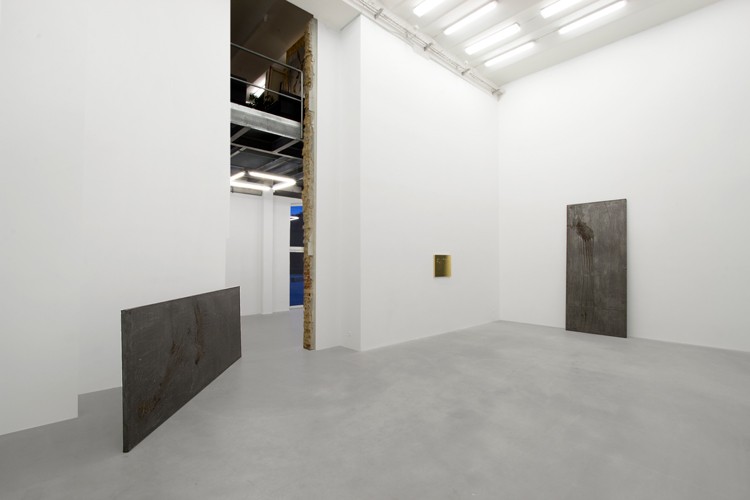